The stock rally that emerged during the fourth quarter of 2016 showed no signs of slowing down after the New Year.  All major stock indices generated positive returns for the first three months of 2017.  The NASDAQ Index was the clear winner with a year-to-date return of 10.13%.  Although international stocks were not part of the fourth quarter rally in 2016, the MSCI EAFE gained 7.39% in the first quarter of 2017.  Large cap stocks posted solid returns from January through March as the Russell Large Cap Index gained 6.03%, the S&P 500 gained 6.07%, and the Dow Jones Industrial average gained 5.19%.  Small Cap stocks lagged as the Russell 2000 Small Cap Index only managed a three month return of 2.46%.

The “hangover” from the presidential election rally has not developed thus far.  Optimism of favorable tax treatment kept investors fully invested and pushed stock markets higher in the first quarter.  However, there was perceptible pause in stock market appreciation as the effort to replace the Patient Protection and Affordable Care Act (aka Obamacare) stalled prior to a House of Representatives vote.  The inability to change Obamacare was not a major economically significant event on its own, but may be an important indicator of things to come.  Investors questioned the likelihood of tax reform and regulation reduction if a Republican controlled White House, U.S. Senate and U.S. House of Representatives could not materially change Obamacare.

The good news for investors is that the fundamental reason stocks have remained elevated is the continued expectation in corporate earnings growth.  According to Bloomberg LP, the consensus estimate for earnings growth for companies comprising the S&P 500 Index is 19.08% for 2017.  This growth rate makes a current price-to-earnings ratio of 21 times on the S&P 500 more reasonable.

In other markets gold rushed higher, oil dripped lower, and interest rates remained uninteresting.  In a response to increased inflation concerns, gold gained $96.85 per troy ounce (8.4%) in the first quarter of 2017.  During the same period, a barrel of oil fell $5.42 (9.6%) as inventories remained high.  Interest rates demonstrated low volatility as government treasuries were nearly unchanged.  The ten-year U.S. Treasury Note began 2017 with a 2.45% yield, and ended the quarter at 2.38%.

First quarter corporate earnings reports should continue to reflect a growing economy.  Corporate profits will sustain stock price growth.  Stocks will continue to demonstrate above average volatility as government policy reforms are presented, digested, and either passed or failed.  However, the underpinnings of stock prices remain strong.  These fundamentals include favorable earnings comparable on a year-over-year basis, low interest rates, low unemployment rates, low energy costs, and the potential for tax reform.  D’Arcy Capital continues to observe a perverse shift in investing strategies that is occurring at exactly the wrong time.  In 2016 investors redeemed actively managed investments (strategies that rely on research and strategic security selection to find investments) and purchased passively managed investments (strategies that do not use research and use an index to determine security selection without regard to fundamentals).  The fund flows were dramatic.  In 2016 investors withdrew $263 billion from actively managed funds and deposited $236 billion in passively managed investments.  These investors are unwittingly increasing risk to their assets and decreasing the potential for investment outperformance.  Additionally, investors appear to be repeating a historic mistake that always ends badly.  Because passive investments have generally performed better than active investments over the last ten years, investors are choosing investments that have done well versus choosing investments that will do well.  This is such a common mistake that it has many nicknames in investing such as rearview mirror investing, chasing the hot dot, and herd mentality. 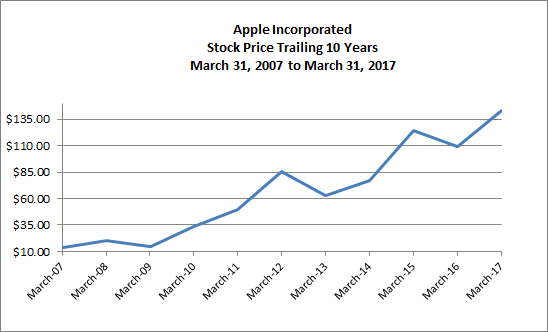 The danger emerging in passive investments is the increasing reliance on a small number of overvalued stocks within the index.  No doubt, these are good companies, but with every additional contribution to a passive strategy the prospect for a good return is diminished and risk is increased.  One example of this reliance on a concentrated holding is Apple, Incorporated.  This is a stock that is valued at $767 billion.  The company’s market cap is $150 billion greater than the second largest company (Alphabet) and three times larger than General Electric.  Apple is the #1 holding in the following passive index strategies (with percent of index in parenthesis): S&P 500 (3.5%), NASDAQ (7.6%), Russell 1000 Growth Index (6.02%), and the NASDAQ 100 (11.82%).  D’Arcy Capital sees this as an invisible accumulation of risk that should be unacceptable to investors.  Historically, the benefit of index investing has been diversification, reduction of risk, and general market returns.  Going forward, the major indexes will be increasingly subject to the fortunes of just a handful of fully valued stocks.  D’Arcy Capital recommends investors continue to seek companies that are undervalued and in “pre-bloom” stages.

In addition to the overall risk in passive strategies, D’Arcy Capital has exposed unfavorable risk versus reward ratios in brick and mortar retail, real estate, utility, and long dated U.S. Treasury bonds.  D’Arcy Capital has identified favorable risk versus return ratios in the financial sector, municipal bonds, and European domiciled corporations.  As the general levels of markets increase, investors must resist complacency.  There are exceptional, high-potential investment opportunities in financial markets.  However, the most successful investments of the next ten years are unlikely to be the exact same investments of the previous ten years.