Stocks prices climbed higher during the second quarter of 2017 and bond prices were mostly unchanged.  International stocks were easily the best performing asset class for the April through June period.  The Morgan Stanley Capital International Europe, Australasia, and Far East (MSCI-EAFE) index gained 6.31% in the second quarter.  The NASDAQ index was second-best among major indices with a 4.21% total return during the same period.  Large company stocks also generated solid returns with the Dow Jones Industrial Average (DOW) and the Standard and Poor’s 500 index (S&P 500) returning 3.95% and 3.09%respectively.

As discussed in previous D’Arcy Capital Economic Perspectives, financial markets are being supported by strong fundamentals.  With political “jaw-boning” commanding so much of the media output, it is often difficult for investors to remain focused on the true creators of value and income.  The macroeconomic support for higher stock prices and higher bond prices is low interest rates, low unemployment, low inflation, low energy prices, and the resultant growth of corporate earnings.  Those investors who fretted that a tightening interest rate cycle from the Federal Reserve would be bad for stocks, have been proven wrong.  In June, the Federal Open Market Committee increased short-term Federal Funds Rate for the third time in seven months.  Over this same period the S&P 500 has gained 8.7%.  The Federal Reserve is in synch with the recovering economy.  Cash savers are also beginning to see an appreciable change in interest income as money market rates have gone from 0% to over 1% in the past eighteen months.

In other markets, gold got lightly dusted, oil was drilled, and interest rates remained low and stable.  As the stock market continues to advance, it also continues to attract money from commodity investors.  As a result, gold lost $7.47 per troy ounce (.5%) in the first quarter of 2017.  During the same period, a barrel of oil fell $5.55 (10.7%) as inventories remained high.  Interest rates remained stable as government treasuries were nearly unchanged.  The ten-year U.S. Treasury Note began the second quarter with a 2.38% yield, and ended the quarter at 2.31%.

Although the prospects for investing remain strong, the continued use of risk management could prove useful in seeking excess performance.  The most prudent risk management moves investors should consider in the current market environment are: 1.) sell passive strategies and buy active strategies 2.) Sell long maturing bonds and buy short maturing or floating rate bonds 3.) Reduce exposure to large cap companies and increase exposure to small cap companies.  These three moves should not only reduce risk but they should provide the potential for better returns.  Sector rotation is becoming more important as some sectors are coming to the end of a performance cycle and other sectors are about to start a performance cycle.  For the first time, in a long time, D’Arcy Capital’s research is uncovering opportunities in the energy/oil sector.  With oil prices remaining below $50 share, integrated energy companies have been forced to control costs and become more efficient.  The slump in oil prices have also force the stock prices of many energy companies lower.  This lower price has compressed price-to-earnings ratios, price-to-book ratios, and increased dividend yields. 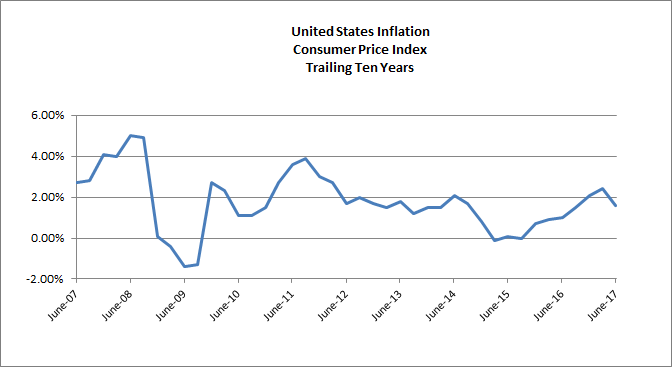 The economy should also expect a pickup in inflation (another great reason to own equities).  The current inflation rate is 1.6% in the United States.  This is unsustainably low given the corresponding unemployment rate of 4.3%.  This is the sixth quarter in a row that the unemployment level has been below 5%.  The last time this occurred was September 2005 to December 2007 when there were ten quarters of unemployment rates printed between 4% and 5%.  During this period the average inflation rate was 3.1%.