Third-quarter financial markets in 2016 continued the same pattern that was established in the second-quarter.  This trend is that small capitalized companies outperform large capitalized companies, interest rates remain low, and commodity prices continue to be cheap.  The NASDAQ Composite Index was the best performing broad market index, gaining 10.02% for the three months ending September 30, 2016.  The Russell 2000 Small Cap Index was nearly as good with a 9.05% total return over the same period.  By contrast, the S&P 500 and Dow Jones Industrial Average produced 3.85% and 2.78% gains respectively.  Foreign equities split the difference of large and small stocks with an increase of 6.50% in the third quarter.

Even with the increasing likelihood of Chairwoman Janet Yellen and the Federal Open Market Committee (FOMC) increasing the Federal Funds rate, free-market interest rates remained virtually unchanged for the third quarter.  The quarter began with the 10-year U.S. Government Treasury bond yielding 1.44% and ended three months later yielding 1.60%.  During the quarter the rate reached a low of 1.36% on July 8th.  To put the current level of yields into perspective; in the ten-year period of September 30, 1998 to September 30, 2008 (leading up to the “Great Recession”) the average yield on the 10-year Treasury bond was 3.37%.  The rate reached an intra-period high of 6.67% in January 2000 (three months before the start of the Dot Com collapse).  For new investors it is inconceivable to receive 3.0% on a triple A rated investment and “mind-blowing” that at one time (in recent history) an investor could clip coupons of 6.67% per year (going all the way back to 1981 a 10-year bond produced a yield of 15.8%).  The FOMC voted not to change the target for the Federal Funds short-term rate at the two meetings held during the 2016 third quarter.

In other financial markets, oil slipped slightly lower as a barrel of Texas Intermediate Sweet crude started the quarter at $50.13 and ended it at $48.24 (decline of 3.77%).  The price of oil fluctuated with inventory levels and OPEC’s attempt to restrict output.  During the third quarter OPEC was unable to get its members to agree on reducing output.  Gold held steady during the quarter with the price for a troy ounce increasing only $1.66 to $1,317.80. 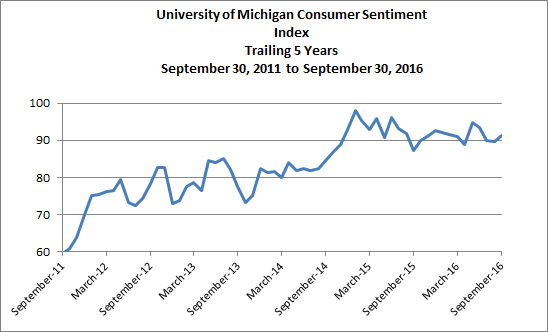 The summer quarter had no shortage of noise (information that generates volatility but does not affect the long-term value of investments) to unnerve investors.  The quarter started just after citizens in the United Kingdom had voted to leave the European Union (aka BREXIT).  It continued with the simultaneous development of the U.S. Presidential campaign and the approaching Federal Reserve interest rate increase.  Fortunately, for investors the non-noise (economic fundamentals) remained very strong.  The unemployment rate ended the quarter at 5.0%, the University of Michigan Consumer Sentiment Survey stayed high by recording a 91.2 level at quarter-end, and inflation remained modest at an annualized rate of 1.1%.  These solid economic indicators combined with the low cost of capital (borrowing rates between 1% and 4%) and the low cost of energy (oil below $50 per barrel) has given investors increased incentive to buy stocks.

D’Arcy Capital believes that the FOMC will leave the target interest rate unchanged at the November meeting (six days before the U.S. general election) but will increase it in December.  The financial market participants who still believe an interest rate hike is bad for the economy are misguided.  A more serious problem is if a rate increase is not made.  This would indicate the economy remains fragile.  A rate increase in December or the first quarter of 2017 would provide a signal that economic conditions are improving.  This would encourage investors with large cash balances to enter the stock market.  Additionally, higher rates would provide improved compounding rates for dividends and interest, positive earnings on savings balances for ultra-conservative investors, and more rigorous return hurdles for cost/benefit analysis.

As written in the two previous Market Intelligence reports from D’Arcy Capital, 2016 will contain plenty of volatility.  This has been very accurate for the first three quarters of 2016.  With a general election, two Fed Fund Rate decisions, and typical year-end portfolio re-engineering yet to come, investors should not expect a reduction in stock price fluctuations.  And, just like the first three quarters, the volatility should not create a permanent reduction in long-term intrinsic values.

D’Arcy Capital believes the outperformance for small cap stocks will continue.  Additionally, opportunities can be found in foreign emerging markets, global financial firms, and high yield bonds.  Municipal bonds continue to provide a unique opportunity for investors who reside in high tax brackets.  Tax free municipal bonds are yielding about 140% more than equivalent U.S. Treasury bonds.  Historically, this ratio has been around 70% to 80%.  Research at D’Arcy Capital also indicates that too much risk, relative to the potential reward, exists in energy stocks, utility companies, and government bonds.  For individuals who need fixed rate borrowing or home refinancing, now is the time to use leverage.  The best opportunity in the current economic environment is low long-term fixed borrowing rates.  Which is about to change.