The fourth quarter of 2016 contained plenty of important developments to keep investors busy. The two most significant events were the U.S. general election and the first interest rate hike by the Federal Open Market Committee (FOMC) in twelve months.  The benefit of both of these events was that investors were provided much needed certainty.  On November 9th investors were received certainty on who would be in the White House, U.S. Senate, and U.S. Congress.  On December 14th the FOMC raised the target Federal Funds rate 25 basis points to .75%.  This established certainty that the economy is improving and the Federal Reserve is initiating a tightening cycle.  Although investors had not priced-in a Donald Trump victory prior to Election Day, the effect of the surprising result was very short.  As election results began to be counted and Hillary Clinton failed to receive the electoral votes necessary to achieve the expected outcome, the U.S. Dow Jones Industrial Average stock futures sank 800 points or just over 4%.  However, by the end of the next day the Dow had tacked on 256 points in response to a victory by President-elect Trump.  By the end of November, the total gain since the election was 1,429 points or 8.2%.

For the entire September 30th to December 31st period, small cap stocks were the best performing asset class with a total return of 8.82% (Russell 2000 Index).  The Dow Jones Industrial Average was not far behind with a 4th quarter total return of 8.66%.  Other major market indices were mixed with the S&P 500 pushing ahead by 3.82%, the NASDAQ eking out a 1.69% gain, and developed foreign markets (MSCI EAFE) losing .62%.  For the entire year, small cap stocks were the big winner with a twelve-month total return of 21.28% (Russell 2000 Index) and international stocks performed the worst with a 1.59% gain. Further evidencing the benefits of asset class diversification was the varying returns for the NASDAQ (8.97%), the S&P 500 (11.95%), and the Dow (16.50%).  Additionally, value stocks significantly outperformed growth stocks across all market capitalizations.  The Russell 3000 Value Index (All capitalizations) returned 18.38% in 2016 while the Russell 3000 Growth Index (All capitalizations) returned just 7.38% over the same period.

In other financial markets, bond values sank during the fourth quarter in response to an anticipation of a more robust economy, oil pumped higher, and gold melted lower.  For the entire year, interest rates were little changed.  The 10 year U.S. Treasury note began 2016 at 2.24% and ended the year at 2.44%.  However, the fourth quarter was especially painful for bond holders as rates spiked nearly a full percentage point in the final 90 days of the year from a 1.60% yield on the 10-year UST note to the year-end level of 2.44%.  Oil gained 8.4% for the quarter as the year-end value of a barrel of West Texas Intermediate Crude traded for $54.66.  This was nearly a $10 jump from where oil traded at the end of 2015 ($44.97).  Investors continued to reduce their combined appetite for gold during the fourth quarter.  A troy ounce of gold declined 12.5% in the final three months of the year to settle at $1,153.05.  However, this was still an 8.5% increase for the entire year.

Investors are optimistic that President Trump will engage in substantial tax reform (both personal and corporate) to improve the economy.  There is also the expectation that the new White House resident will lower government regulations imposed on business.  Lower corporate taxes and lower regulations reduce the cost for publicly traded companies to operate, which would have a positive impact on share prices.  A lower income tax would increase the benefits of investing to all financial market participants and would increase the demand for stocks and bonds.  However, not all of President Trump’s initiatives are as clearly beneficial to the economy as lower taxes and lower regulations.  The protectionism policies that President Trump articulates would make U.S. producers and manufacturers less competitive over time. 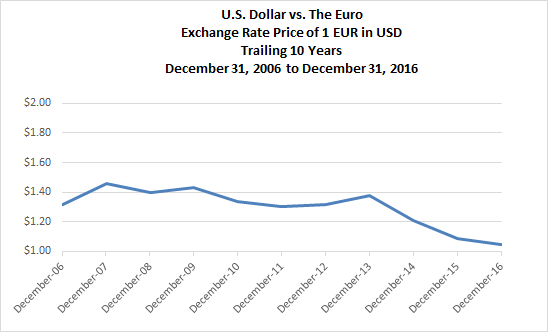 Ultimately, bond and stock prices will be determined by the execution ability of publicly traded corporations.  Although investor optimism is currently pinned to a Trump Presidency, the historic relationship between who is in the White House and the performance of the stock market is uncorrelated.  As 2017 unfolds, investor dependency on policy reform will lessen and the focus will return to the long-term profitability of corporations.  The environment still remains very favorable for gradually increasing interest rates and positive stock market returns.  With higher stock prices and increasing yields, the U.S. dollar should remain strong against competing currencies.

In 2016 D’Arcy Capital consistently recommended the overweighting of the financial sector (24.83%), small cap stocks (12.27%), emerging markets (11.36%), and developed foreign markets (1.59%).  During the year D’Arcy Capital went from bullish to bearish on REITs and bearish to bullish on High Yield bonds.  D’Arcy Capital believes that a satellite combination of exposure to the financial sector, emerging market sector, small cap sector, and high yield bond sector will remain favorable for the first half of 2017.  D’Arcy Capital continues to actively underweight the utility, energy, consumer staples, and real estate sectors.  In the fourth quarter of 2017 there was a fierce reversal of the trend for passive investments outperforming active investments.  D’Arcy Capital believes that passive investments (indexing) will continue to present underappreciated risk relative to actively managed investments.