Financial markets rallied into the close of 2017 with another strong quarter. Global stock markets appeared unstoppable as index returns ranged from 3% to almost 11%.  Investors were emboldened by a lowered domestic tax rate for corporations, a revised income tax schedule for individuals, and a climbing Gross Domestic Product (GDP).  Legislators lowered the corporate tax rate from a maximum of 35% to a flat 21%.  This was received favorably by U.S. based corporations as some immediately announced plans to repatriate cash held in overseas accounts.  Other firms announced they would provide bonuses to existing workers as a result of the lowered tax rate.  Simultaneous to the corporate tax rate reduction, was the restructuring of U.S. income tax policy.  Previously allowable deductions (personal exemptions and state income tax deductions) were eliminated or reduced in exchange for lower tax brackets and an increased standard deduction.  Many individuals remain uncertain if the net benefit is positive or negative.

The Dow Jones Industrial Average (Dow) was the best performing index for the quarter by gaining 10.96%. This also made it the best performing index for 2017 with a total return of 28.11%. The S&P 500 Index and NASDAQ Index had nearly identical returns during the final three months of the year with gains of 6.64% and 6.57%, respectively.  Most major indices achieved twelve month total returns of over 20% for 2017.  The S&P 500 was up 21.82% and the NASDAQ was up 29.73% for the year.  Smaller companies produced positive returns for 2017 but not to the same extent of larger company stocks.  The Russell 2000 Small Cap Index was up 3.33% for the fourth quarter and 14.63% for the entire year.

In other investible markets, the value of oil increased, the price of gold went higher, and the price of bonds went lower. Oil gained 15.70% in the fourth quarter to finish the year at $60.44 per barrel.  However, this was only a 6.4% increase for the entire year.  An ounce of gold increased by $22.75 during the quarter and $153.21 for the year as it was last priced at $1,306.21 on December 31, 2017.  The price of a bond fell as a result of a marginal increase in yields during the last quarter of 2017.  The Federal Open Market Committee (FOMC) increased the target for the Fed Funds rate at the December FOMC meeting.  The short-term rate increased .25% to 1.50%.  This action only had a small impact on market traded bonds as the U.S. Treasury went from yielding 2.33% to 2.40% during the quarter.  This returned the 10 year to almost exactly where it started the year (2.44%)

As discussed in the previously quarterly report, D’Arcy Capital believes the next major financial market event is biased to an overheating economy and not a slowing economy. The fundamental indicators used by D’Arcy Capital reflect a very strong economic environment.  During the 4th quarter, the unemployment rate declined one-tenth of one percent to finish the year at 4.1%.  The fourth quarter was the strongest job creation quarter of 2017 (593,000 non-farm payroll increase).  In 2017 each quarter produced an average increase of nearly 530,000 new jobs. 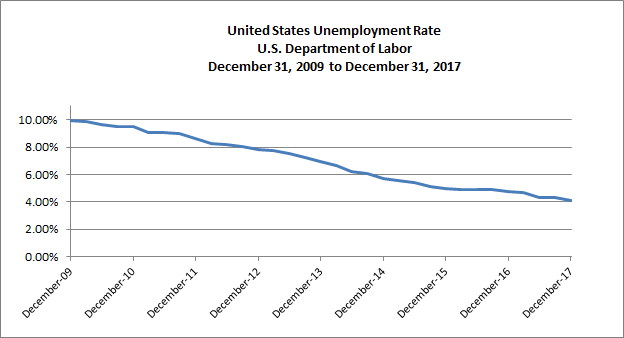 The tightening of the U.S. labor market is important because it has the potential to increase inflation. With low unemployment rates, a retiring “baby boomer” generation, and an inadequate immigration of skilled workers, the threat of wage inflation becomes significant.  D’Arcy Capital expects to see a gradual increase in inflation.  Although a transition to higher interest rates and increasing inflation can create volatility, the ultimate effect on financial markets is far different than the great recession of 2008 and 2009.  With inflation it is important to maintain a full weighting (consistent with an individual’s long-term allocation strategy) to stock investments.  The effect of inflation is that it erodes the purchasing power for consumers (i.e. products cost more but do not provide any additional benefits). Corporations that sell products can increase prices as inflation develops.  These higher prices can create higher nominal revenues and higher nominal profits.  This results in higher stock prices, which allows investors to maintain purchasing power as their financial assets increase with inflation.

A managed increase in inflation and interest rates is a good thing. However, the transition from lower to higher interest rates will cause an increase in volatility.  It is important that long-term investors do not get “shaken out” when sell-offs occur.  The long-term benefit of maintaining purchasing power and a consistent standard of living outweighs the risk of a prolonged bear market.